Let's have a closer look at the origin of the term "casino". The term "casino" stands for a public building that serves for gambling activities and other entertainments. As a rule, betting houses are situated near restaurants, shopping malls, large hotels and other places that attract people and tourists.

The etymology of the word "casino" goes to Italian "casa". This word means "home" but in Italy it was commonly used to describe mansion, country house or pavilion. Sometime later the word was also used to describe a building that combined different kinds of services: gambling, music listening, dancing, drinking and other leisure activities. 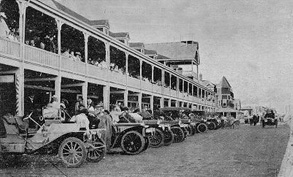 In the 19th century the term "casino" was also applied to describe other social buildings that were used for sport activities, concerts and other entertainments. The example for it is the Newport Casino that is situated in Rhode Island in Newport.

It is necessary to mention at that period of time not all casinos were used for playing. Casino buildings covered different demands of their visitors. For example, the Copenhagen Casino was a theater. Its concert hall was used for public gatherings during the European Revolution. Until the middle of 1900s it was a popular theater in Denmark. The Hanko Casino in Finland was never used for gambling purposes. It mostly served as a sophisticated restaurant and spa resort and nowadays it attracts gourmands from all over the world. The Catalina Casino that is situated on the coast of LA in Avalon was also never used for playing hazard games. It is the main recognizable landmark in the City of Avalon. It includes a theatre, a museum and a concert hall.

It is hard to name the precise date of gambling emergence. But it is common knowledge that gambling games first appeared in China in 2300 BC. It is also generally recognized fact that gambling existed almost across every society, country or nation. Games of chance were known in Egypt, Greece, Rome, India and spread over the whole Europe afterwards.

Ridotto (founded in Venice, Italy in 1638) was the first casino in Europe. It administrated gambling in time of carnival season. But in 1770 it was closed due to anti-gaming moods and government applied gambling laws and restrictions on hazard games.

In the United States first casinos developed to country saloons where drinks were served, music was loudly played and gambling games were flourishing. The most popular local gambling centers were: New Orleans, Chicago, San Francisco and St. Louis.