Three Gods of ancient Greek mythology Zeus, Poseidon and Hades decided to divide their possessions - heaven, sea and the Underworld by throwing the dice. The moral of this story shows us that mankind was guided by fortune within the compass of a lifetime. And do you remember the legend that tells us that few elements of those dices turned into the Pompeii ruins? 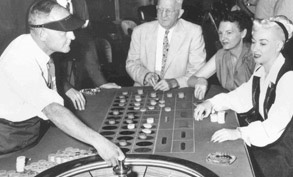 Gambling is considered to be one of the oldest entertainments known for mankind. Archeologists provide strong evidence that first people on Earth were gamblers. Ancient dice-like objects made from bones and other material were definitely used for gambling. Such findings are dating back to approximately 40.000 years and comprise to a gambling legacy. Cave sketches display people in the process of gambling - and that is another proof of ancient gambling.

In China, gambling appeared in times of Xie dynasty and Shang dynasty. Moreover, this country gave birth to Keno that is considered to be one of the beloved gambling games among players from various countries. It is interesting to note that China legalized gambling in order to boost the profit of the dynasty. People voluntarily gave away their money for playing and took part in games in order to get excitement and adrenalin. Nevertheless, there was a period when gambling in China was prohibited. But sometime after that antigambling mood disappeared and legal status of hazard gaming was renewed because authorities recognized its importance to the economy of the country.

What games were popular in China in the past and what adventures are widely used nowadays? One of the most famous Chinese gambling games is Mahjong. This originally eastern game is played with the help of tiles. Chinese are also funs of all possible lotteries. Keno may be considered as the predecessor for the whole range of existing lotto.

All Roads Lead to Rome

Most gambling games came to Rome from Greece. It is not a surprise because Romans adopted a lot of different things from Greeks including mythology, traditions and customs. Do you remember the legend where Greek champions Ajax and Achilles are playing dices at the time of the Trojan War? Romans and Greeks also admired the game named "Head or Ship"/ "Head or Number". It is a coin-tossing game which refers to guessing what side of the coin will come up. As a rule every single coin has a face imprinted on one side and number or anything else (like ship) on the other side. This game is known now like "Head or Tail" and is still popular in some communities. Thus, in Greece and Rome guessing games were the part of everyday life alongside with dices and other gambling adventures.

Persians, Egyptians and Mesopotamians took active part in playing gambling games. Among the most popular games in that regions were games with two dice, guessing games and board games. Actually Egypt gave birth to roulette, poker, slots and blackjack evolution.

In India gambling emerged 4000 years ago. Members of royal families introduced it when practiced throwing dice in order to win the crown. Indians were also fond of gambling games involving animals (for instance, cock and ram fights).

It is necessary to mention England with its pigeon races, dice games, lotteries, cockfighting and other contests illustrated in medieval literature. All these games evolved, changed and are still popular today in some regions.