The Idea of Creating Casino Movies 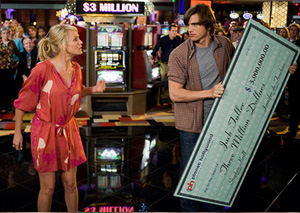 People recently get used to the idea that all films are somehow confined to Hollywood and its celebrities. Nevertheless there are few movies that were based on gambling and became bestsellers that captured the headlines of world cinematography. Actually movies about hazard games and movies that contain gambling scenes are quite popular nowadays. Here are some movies with short characteristics that you have probably already watched. If you are fond of gambling but are still unfamiliar with them yet include these films immediately in your "must-see-list"! It is absolutely impossible that casino lover may become disappointed after watching them as far as they were directed by best directors and involved very talented actors. Enjoy the top casino movies inspired by Las Vegas evolution in gambling!

Rain Man movie was directed by Barry Levinson in 1988. This is a dazzling masterpiece, comedy-drama story about selfish Charlie Babbitt (played by Tom Cruise) and his autistic brother Raymond (Dustin Hoffman) who came into fortune and received inheritance from father.

Honeymoon in Vegas is a terrific comedy that was directed in 1992 by Andrew Bergman. Nicolas Cage, Sarah Jessica Parker and James Caan took part in it. The film is about New York citizen who went to Las Vegas with his wife but soon understood what a mistake he has made.

Directed in 1995 "Casino" is a classic movie about land casinos standards and is number one choice for great audience. This is crime drama film directed by outstanding director Martin Charles Scorsese. The life of genius of gambling business Robert De Niro is getting much complicated when volatile Nicky Santoro (Joe Pesci) joins him. But there are more problems ahead when he meets on his way beautiful cheater (Sharon Stone).

Directed by Matthew Jay Roach in 1997 and written by Mike Myers this comedy started the Austin Powers series. Movie describes struggle of British spy Austin Powers against Dr. Evil who plans to ruin the whole world.

Filmed in 2001, this story is headed up by George Clooney and another Hollywood stars like Brad Pitt, Matt Damon, Julia Roberts, Don Cheadle and loads of others. This group of people prepares to rob three largest and most reputable casinos in Las Vegas.

What Happens in Vegas

This is funny romantic comedy released in 2008 from 20th Century Fox. Cameron Diaz and Ashton Kutcher are waking up together in Las Vegas and find out that they had a wedding on day earlier. Things are getting worse when they began to fall in loveâ€¦

The Hangover is one of the most brilliant comedies ever. It was directed by talented Todd Phillips in 2009. Actors Bradley Cooper, Ed Helms, Zach Galifianakis, Heather Graham, Justin Bartha and Jeffrey Tambor performed outstanding story about stag party that took place in Las Vegas. The film was released by Legendary Pictures and has a budget of 35 million dollars.