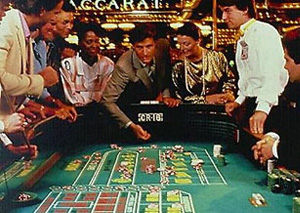 The development of casino games is an extensive and charming story collected from myths and legends, unconfirmed suppositions, evident records and wise conjectures. It embraces a wide range of cultures and spreads across a great number of regions and places within our Earth.

We can note early references about casino games in its first stages even in Greek and Roman mythology in legends about Zeus, Poseidon and Hades who threw dice in order to separate the world into realms where they will master (Heaven, Hell and the Sea).

Pay heed that gambling was often used not just for fun but to determine the fate of the whole countries and Kingdoms. Thus in the 11th century Norway and Sweden settled the land conflict by the roll of the dice.

Rulers of China legalized lotteries in order to urge people to give away voluntarily their money and enrich the country's treasury and support the existing army.

More regions enter the gambling game. Italy legalizes gambling and introduces the word "casino." Casinos are used not just for playing hazard games but as well as concert halls, theatres and for other urban entertainments.

Though gambling history in America started with the very first settlers, attitudes on gambling varied from one community to another. Moreover, great amount of restrictions that exist even nowadays made a lot of obstacles on the way of gambling progress. But still now Americans use lotteries to finance tutorial infrastructure.

Taking into account all the facts written above, one can conclude that gambling games were an integral part of the ancient civilizations' lifestyle, medieval society and modern world. It existed in various forms and ways. Gambling helped to determine who will be the ruler of the kingdom or who will get the victory in war. It also suggested the solutions in different conflicts and complicated situations. With the assistance of coins and dices people worked matters out and gave judgments. These very primitive games have led to the evolution of casino games as we know them today. They allowed the development of sport wagering, card games, roulette evolution, coin machines and many other hazard adventures.

The necessity of risk taking is running in our blood. Gambling and adrenalin are coded into our DNA. Internet casinos revolution is a new face of gambling and it will lead us to new and even more sophisticated and thrilling games and adventures.

Thus, from ancient cultures such as Egypt, Greece, Roman Empire and China to medieval Italy and up to modern online casinos with enormous variety of offered pleasures gambling games were progressing, changing and developing. Meet the Golden Age of gambling games and enjoy the ride!